Wolfville Farmer’s Market – One Brick at a Time

Eighteen years have passed and it’s been a long and fruitful journey for the volunteers, directors and staff of the Wolfville Farmers Market. Starting with three vendors in a parking lot, this community hub has been transformed into a bustling intersection of business and pleasure. Live music plays prominently every Saturday morning like a piper, enticing neighbours and tourists alike to spend an hour or two taking in all of the flavours of Nova Scotia’s Annapolis Valley. Well known for its sensational array of apples, berries, organic produce, and rich, red soils, the region is an integral piece of the Nova Scotia food map. It’s a true coming of age story for the little farmers market that can, and with a big fundraising campaign underway, the Wolfville Farmer’s Market is casting off its outgrown, outdoor shell and will be moving into its new home in September, 2011.

The story reads in an all too familiar tone, like many other Canadian agricultural regions: gloomy, desperate, and slated for development. Warehouses and processing facilities of yore are empty shells, if they stand at all, and what used to be the source of much of Nova Scotia’s edible offerings is in limbo. Rezoning and other threats to Class A Agricultural land sets precedents that could see the region experience even more food insecurity. With a move toward imports and industrialized agribusiness, the Valley now produces only about 8.4% of what Nova Scotians actually eat, according to a report by the Nova Scotia Federation of Agriculture, 2007. Just as the story veers in even more dire directions, progressive movement is under way to change what can be changed.

Wolfville shines a bright light on the grim food system every Saturday. The community of Wolfville and surrounding area is putting its farmers market in high gear, with plans to move into a permanent, indoor space by May 21st of this year. The plans are ambitious, and the designs incorporate the beauty that is the mud flats and historical dykes of the Bay of Fundy into its sightlines. Acadia University has leased the currently underused space at $1.00 per year to the Wolfville Farmers Market for 20 years, while the market will be responsible for renovations and construction costs. The totals hover around $800,000.00 for the project to come to fruition. Government grants, community donations and vendors have responded enthusiastically, and as of writing this article, they have raised a total of $535,134.94, plus $100,000.00 committed by market vendors. With upwards of 79% of the funds raised and nine months to go, they are moving quickly toward open doors, and are actively seeking more support.

No longer carrying their homes on their backs, vendors will be able to set up shop, and leave it for six days until the next market, twelve months of the year. This allows vendors to concentrate energy on production and processing to meet a growing consumer demand. No more revenue-light, rainy days, or lack of running water for these local artisans and farmers, the DeWolfe building will have all the mod cons. The market now boasts over 60 regular food and craft tables, selling homemade goods to eager customers. The old apple sorting and packing warehouse will be retrofitted to create an indoor market with an outdoor feel. A wall of garage doors are being installed to make the indoor space feel open and airy in the summer months, while keeping it warm and cozy through the winter. “Come from aways”, tourists and residents alike will find ample parking, seating areas, information boards, and other facilities to make their visit even more worthwhile. 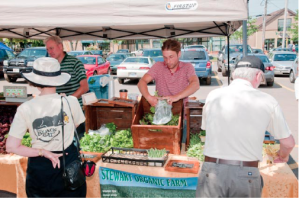 Sarah and Joey Pittoello, currently farming with Stewart’s Organic Farm, are in the process of purchasing their own farm. These two young, ambitious farmers are excited to have the new building open its doors so that they can include a more permanent source of revenue in their business plans.

Heather Lunan and Ray Burton of Pie R Squared jumped on the bandwagon only months after a move to Wolfville from Calgary and have created a deliciously successful business making savoury pies and quiches sold at market. For Heather, the new building is a very positive development. Not only will it help them economically, but Heather says that with infrastructure in place like refrigeration and power, their product can only get better. Not having to lug around warming ovens, hot plates and coolers will allow the family-run business to concentrate on the pies, develop new recipes and eliminate much of the risk to themselves, and to customers. By having all of the tools they need in place at the DeWolfe building, food safety will not be as much of a challenge, and they look forward to happier health inspectors.

Devin Folks, Information Booth Coordinator for the Wolfville Farmers Market, suggests that by having an indoor space, the customers will have a safer and more convenient place to buy their food, which will in turn support the producers and processors, artisans, and craftspeople of the local economy to grow their businesses. This might come in the form of expansion of product lines, or more time to create value added products in lieu of the time it currently takes to schlep around tables, shelves, coolers, lights, burners, fridges, and other equipment that only have a temporary home in the outdoor space. With a stall in place, these vendors can concentrate their energy on the product they are selling and hopefully generate more revenue, creating more secure employment and income; a common struggle in the sustainability of work for agriculturists, chefs and artisans throughout Canada. Selling directly to the customer, being able to tell the story of the product and its provenance, and having products to sell are all keys to success at a farmers market. This new development will surely make it easier and more convenient for everyone involved to create a strong local food system and vibrant community hub.

One brick at a time, this community-building project is becoming a sound investment and welcomes your support. To purchase a brick in an effort to meet fundraising goals, please visit the Wolfville Farmers Market. They look forward to welcoming you on your next visit.